validating that a user is human by validating steps

The Physics Derivation Graph doesn't currently support the existence of user accounts, but I expect that may be needed in the future.

There will be multiple problems to address associated with having users, and one of them is figuring out whether a user is human or not. There are many CAPTCHA (Completely Automated Public Turing test to tell Computers and Humans Apart) methods to choose from; in this post I'll outline a CAPTCHA specific to the Physics Derivation Graph.

A challenge in the Physics Derivation Graph is to determine whether a step in a derivation is valid or not. Using a computer algebra system (CAS) like Sympy or Sage is viable for simple inference rules and simple expressions. No one CAS is capable of supporting all the PDG content, so manual intervention is necessary.


Similarly, the candidate user has been forced into a binary category of machine or human. There are gradients here (a good algorithm may be more effective than a dumb human), but I am going to focus on the humans that are smarter than algorithms.

As with other Turing tests, a single binary question is insufficient because I need to be able to distinguish from a candidate user who merely flips a coin to answer the question.
The challenge relevant for the use of step validation can be reduced to the following:


Given N questions with a binary outcome, how certain can I be that the coin is biased?

The bias of the coin in this situation is the intelligence of the candidate user. A machine algorithm or a dumb user should have results similar to an unbiased coin, while a smart user should get more answers correct than incorrect.

Instead of focusing on the binary question of "is the step valid or not," attention should be on "did the candidate user get the response correct or not?" with respect to a step where the outcome is known. 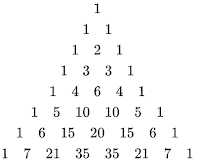 Suppose I have N=3 coin flips. The unbiased coin with sides "correct" and "incorrect" will yield "correct, correct, correct" 1/8th of outcomes, just as the outcome of "incorrect, incorrect, incorrect" occurs 1/8th of the time. The other two outcomes (incor, incor, cor) (cor, cor, incor) have three permutations each. This distribution corresponsds to the "1 3  3  1" row in Pascal's triangle.