Objective for this project: Write down all known mathematical physics in a way that can be both read by humans and checked by a computer algebra system.
To support that, the Physics Derivation Graph provides a schema and software infrastructure for the systemization of documenting mathematical physics. By semantically enriching mathematical expressions, connections between topics is observable.
For the impatient, see the Physics Derivation Graph navigation.

The database for documenting relations in derivations of Physics is a JSON file. This can be transformed into other formats; see the PDG navigation page.

Motivation: Mathematical Physics uses the tools of math applied to measurements of our environment. Physics is a unique field in that all existing knowledge can be recorded. Another aspect that is unique is that the result can be checked for correctness by a computer algebra system. A third unique facet to Physics is that claims can be tested by experiment.

Historical context, relation to other efforts

Jargon specific to this project

"Inference rules", "expressions", and "feeds" are words specific to the Physics Derivation Graph. Represented graphically, their relation is 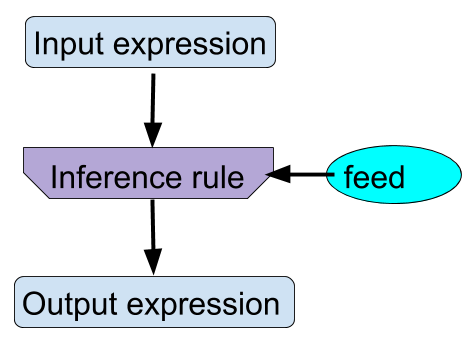 Read this directed graph as, "The inference rule acts on the input expression and, combined with the feed, produces the output expression." Inference rules can be considered as functions; the above picture would be

Where to get started?

Use the Physics Derivation Graph navigation, or read the FAQ, or review the documentation.

See also other related or similar projects, literature review, and experiments in annotation.