Derivations in Physics are composed of steps. Each step involves one inference rule and one or more expressions. In this section a single step is described.

In the above example, three terms used in the Physics Derivation Graph are demonstrated. There are two mathematical expressions: \eqref{eq:period_and_freq} and \eqref{eq:freq_is_inverse_period}. These expressions are related by an inference rule: "Divide both sides of first expression by a scalar value to yield the second expression." This inference rule takes an argument, referred to here as the feed, which in this example is \(T\). The relation of these terms is shown graphically below in figure 1: 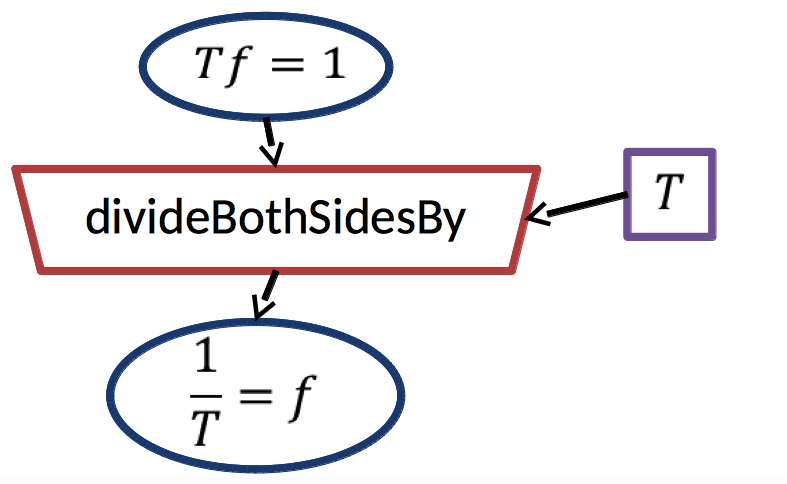 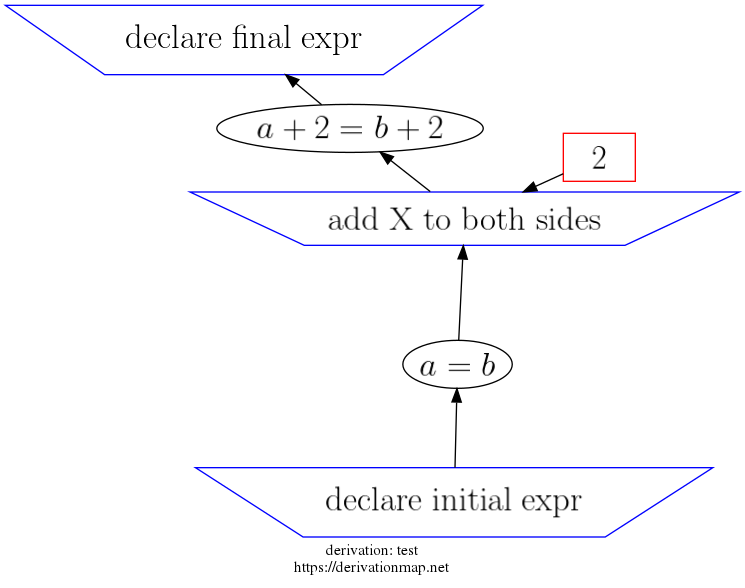 Figure 3. A three step derivation involving two expressions. In this rendering, the start of the derivation is at the bottom of the image.

The graph content takes the form of expressions (e.g., equations and inequalities), inference rules, and feeds. The expressions and feeds are built from symbols. In the example provided above, the symbols are period \(T\), frequency \(f\), equality \(=\), division \(/\), (implicity) multiplication, and the numeric value 1. The two expressions are \eqref{eq:period_and_freq} and \eqref{eq:freq_is_inverse_period}. An inference rule is defined here as an atomic transformation of one expression to another. The inference rule being applied implicitly between \eqref{eq:period_and_freq} and \eqref{eq:freq_is_inverse_period} is "Divide both sides of first equation by a value to yield the second equation." This inference rule takes an argument (the "feed"), which in this example is \(T\).

The list of expressions used in the Physics Derivation Graph is intended to be comprehensive.

This requires breadth of coverage across all the domains of physics (\ie, classical mechanics, quantum mechanics, relativity, thermodynamics, statistical mechanics, etc). As a consequence, much of mathematics covered up to undergraduate level is likely to be required.

Education in Math and Physics

Currently students in Math and Physics are taught content using lectures, textbooks, and homework. The method of presentation varies, but the overarching story is often historically driven. Algebra is old, calculus is newer, and topology is recent. Classical mechanics is old, thermodynamics is newer, and quantum mechanics is recent. When teaching, these subjects are taught by building on previous content -- calculus leverages algebra, thermodynamics leverages classical mechanics.

How could the Physics Derivation Graph benefit teachers?
For physics teachers, this project could address questions like, "how much of what is known have I learned?" and "what else is there to learn?"
For math students, this project could address questions like, "when would I apply what I am learning?" and "what is this useful for?"

As an example, see Fundamental rules for physics mathematical derivations?

The focus for students in mathematics classes is on the technique, e.g., "integrate both sides with respect to \(Y\)," and application is necessarily of secondary importance. Physics students are expected to know the mathematical techniques and teaching is focused on application. The Physics Derivation Graph can assist both scenarios. The student in a math class can see where the inference rules they learn are applied in Physics. The student in the Physics class can see which inference rules are required in their field.

Each inference rule seems equally important, since it currently is not known what the frequency of use for that inference rule is. In the Physics Derivation Graph, it is simple to count utilization of inference rules. Thus, we are able to measure the ratio of how often "multiply both sides by X" is used relative to "integrate both sides with respect to \(Y\)."